Shadows of the past. 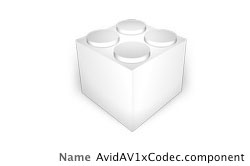 Or what codecs you shouldn’t use for back-up.

I recently rescued my 1997 diploma thesis movie from digital oblivion. It took me a couple of days and required the use of a 15 years old Mac with OS 8, Quicktime 4 and After Effects 3 & 4 installed, that i luckily kept in a hidden corner of my apartment.

Back in the days, i edited the movie on an AVID Media Composer and therefore the quicktime movie was encoded in AVID Codec and i burnt it on two CDs for back-up. At that time – when desktop video editing was still new in town – i didn’t waste a second doubting that AVID would continue supporting their own codec till eternity. To be honest i didn’t think much about video codecs at all.

So some time ago i threw away a bunch of old CDs with software from the stone age and back-ups for clients that don’t even exist any more and came across the disc with my diploma movie. Good old times i thought and inserted the disc into my laptop (yes it still has an optical drive) to watch the flick, but all i got was a blank movie player saying codec not supported. Well no problem: AVID is still the industrial standard for video editing right? So i downloaded the last version of AVIDS codec and got – tada! – a blank movie player saying codec not supported. I searched the AVID site and all over the internet to find a vintage codec version, without any success.

Fortunately i still had this old dusty Mac with the original codec installed. I’m not gonna explain in detail, how i had to bend over backwards, to finally get the movie transcoded to a modern format and transferred to one of my recent computers. But i couldn’t even connect the old Mac to my new ones cause OSX doesn’t wanna talk to it’s old relatives any more.

To put a long story short:

One should very well think about what format to use for back-uping videos. During the last years i usually used ProRes – but what if Apple looses interest in the video market? I’d strongly recommend formats that aren’t dependent on a specific company.
Codecs that where already there in Quicktime 3 are: Animation, Photo Jpeg and Motion Jpeg. Maybe stick to one of these – or image sequences…

So here it is, in all it’s glory and with final renderings that would be considered animatics these days. My science fiction short from 1997 about two truck drivers lost in an endless tunnel system. Originally part of a three episodes movie, with part one & three directed by my fellow students Gunter Rubin & Ralf Hietel (who’s episodes are probably stored in the same shitty format and therefore lost…).
It’s in german without subtitles but in the unlikely event of high public demand i’m gonna do a subtitled version.